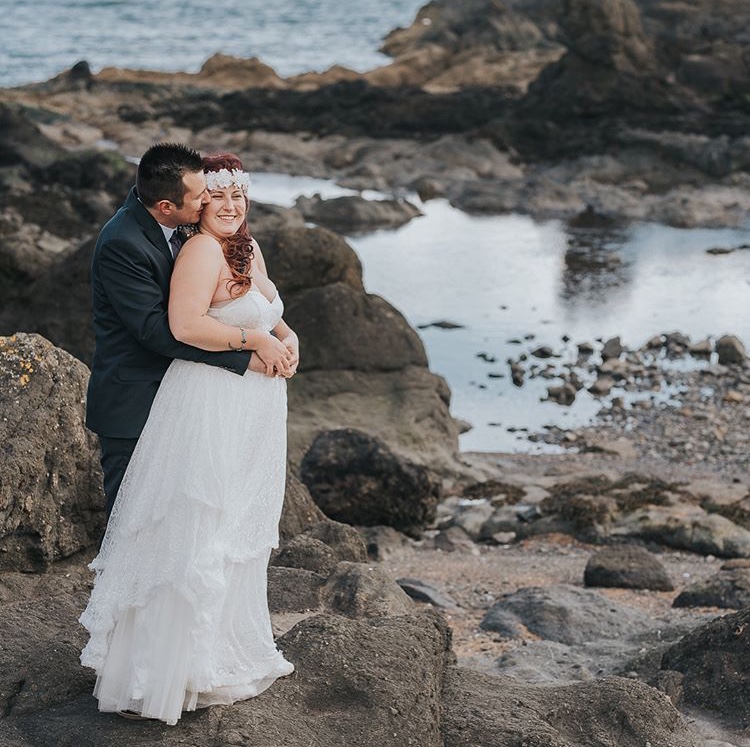 The 26th of April 2018, Inès and Romain, a couple coming from France said “I do” to each other at the Lady’s Tower at Elie in Scotland. Here is their story:

Inès was living in Lyon while Romain was living in Toulouse, but life didn’t let the two soulmates be separated for too long, when he was 20, Romain was to Lyon where he met Inès and it was love at first sight, they knew their won’t live alone anymore. Inès then moved to Toulouse to start her life with Romain after a year of long distance relationship.
After 5 years of love, they decided to go to Scotland for a little road trip, and Inès said to Romain “What if we get married there? Ahah!”, it was just a kind of joke, but after seeing pictures of Scotland they both felt it was where they wanted to get married. So Inès contacted me not really knowing a lot about weddings in Scotland. I explained to her pretty much everything I knew, what is a humanist ceremony etc… And that’s it, they fell in love with the idea and we decided to go on this adventure together!

After 6 months of hard work, Inès, Romain and their witnesses were in Scotland with a gown, a suit and a kilt in their suitcases. After a 5 day road trip, I invited them to sleep at my place, we spoke about our adventures, our trips, our love stories and how beautiful Scotland is!
Before we knew it, it was the D-day!! The bride was getting ready whilst I was helping the groom to finish his speech. I made the bridal bouquet as they were on a budget and the button holes. Everybody was getting dressed except the bride and I took the groom with me so Inès would be able to dress without him seeing anything.

They wanted a simple decoration, so I kept more than 50 jars of different shapes and size’s to put candles in but when we arrived at the tower the wind was so strong it was impossible to light the candles! The jars were flying away and everything else, so we instead decided that the landscape and the sea would be the only decoration.
The bride soon arrived, as she entered into the tower, Romain’s eyes were lit as he realised that he was getting married and they were the happiest people on earth. The French speaking celebrant started to read the text but the wind was so strong that the bride’s dress was flying all over her face. So we then decided to move to the side of the tower where the wind was not too strong and where we had an amazing view of the sea. The celebrant read all the text, the bride and the groom kept looking at each other. They then did a ribbon ceremony where the witnesses were attaching ribbons to each other’s hands while saying a sentence which represents love and joy. Then the celebrant looked at the sea and saw something you will never believe would happen during your wedding day. Two seals were coming over the cliff where we were standing! Everybody were pop eyed! Then Inès said “I take you Romain as my husband” and Romain said “I take you Inès as my wife” and the celebrate pronounced them husband and wife.

Romains started to read his vows to Inès, it was such a roller coaster of emotions to her, she then started crying. She then laughed at the memories he was sharing. She then read her vows, Romain couldn’t stop smiling, they kissed in front of the sea (and the seals!), the witness brought the rings, they exchanged them and they were then married!

They finished the day by taking pictures at the beach and other places for an hour and a half. They then finished their road trip at Edinburgh were they flew back to France.